The Inequality of Sleep: How Rich White People Sleep Better Than Everyone Else 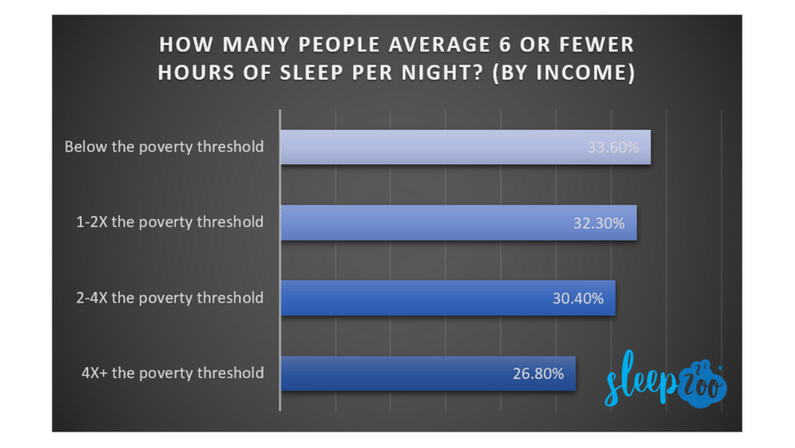 America is facing a growing inequality epidemic – and it’s not the one you’re thinking of.

New research suggests that household income level and race have a direct correlation with the duration and quality of sleep enjoyed by that household. In other words, rich white people enjoy better quality, longer sleep than everyone else.

While much attention is given to the issues of income and wealth inequality, this growing “sleep gap” is not often addressed in the mainstream media. But with sleep affecting nearly every aspect of our lives, the inequality of sleep deserves more attention.

In a National Health Interview Survey by the CDC, adult participants were asked to provide their average sleep duration per night. The results were compiled and analyzed in regards to the percentage of surveyed adults that slept less than 6 hours per night.

The data varied slightly in different locations, but the overall trend was clear:

The rich sleep better than the poor.

But the sleep gap isn’t just between the rich and the poor. Another report from the CDC found that there’s a racial component to the inequality of sleep. Simply put, non-Hispanic whites are likelier to get the recommended amount of sleep — 7 or more hours per night — than any other race. These studies were not isolated in their findings – other clinical trials have looked at the relationship between sleep and income level and found similar results. One study of over 9,000 participants found that “poor sleep quality is strongly associated with poverty and ethnicity”, while a 2007 study found that sleep disruption frequency and symptoms of poor sleep quality were closely associated with food insecurity, lack of private health insurance, and other socioeconomic factors. A Harvard Business Review study published this year also found that senior executives get more sleep at night than lower level workers.

Researchers agree that there is a definitive link between socioeconomic status and sleep quality – but what could be causing this disparity?

Causes of the Sleep Gap

Studies examining the link between sleep quality and poverty have looked at a host of socioeconomic factors, but researchers agree that there is no single cause of the so called “sleep gap”. Instead, a variety of factors is likely at play:

Higher stress levels – individuals living in poverty tend to experience chronic stress at a higher rate than those in higher income brackets. Stress makes it difficult to fall asleep, and can even cause disruptions throughout the night.

Lack of security – a feeling of a lack of security plagues many impoverished individuals, making it difficult to unwind and sleep well. From physical security, perhaps a result of living in a dangerous neighborhood – to financial security, the result of a different equality epidemic altogether, the causes are widespread but the effects are clear: lower quality sleep for those who lack a sense of security.

Mental health – there is a close relationship between mental well-being and poverty, with significantly higher instances of anxiety, depression and mental health issues observed in impoverished populations. These conditions can lead to difficulty sleeping, behavioral issues and more.

Poor diet – a poor diet can contribute to sleep issues, and it is well established that impoverished individuals typically have lower quality diets than their affluent counterparts. It typically costs more to eat a healthy diet, and many low-income families simply do not have the money, time or resources to eat well.

This epidemic of sleep inequality gets particularly insidious when you think about the long-term effects. Many of the consequences of poor sleep quality build on themselves, creating a snowball effect that can have dire consequences.

The graph below explains that adults who get fewer than 8 hours of sleep per night are significantly more likely to feel increased symptoms of stress than their well-rested counterparts:

These feelings of increased stress from insufficient sleep, coupled with environmental factors often outside of the individuals’ control, can lead to serious detrimental effects on an individual’s quality of life and upward mobility. A lack of sleep can increase stress, decrease cognitive function, and more.

In many cases, not getting enough sleep can lead an individual to make bad decisions.

Have you ever wondered why those living in poverty often make seemingly poor decisions? Why rates of violent crime, arrests and other negative social markers are significantly higher in impoverished areas? Why those in poverty are the most likely to gamble or fall victim to predatory lending, high-interest credit card debt, and other financial burdens?

A groundbreaking study published in the Science journal found some truly shocking results: that poverty impedes cognitive function. In other words, impoverished individuals are actually at a cognitive disadvantage to the wealthy, regardless of inherent intelligence or even formal education.

The condition of poverty imposed a mental burden akin to losing 13 IQ points.

The study focused on poverty itself, arguing that the mental burden of poverty leaves individuals with less mental bandwidth for important tasks and critical thinking. It’s not hard to connect the dots and predict that sleep quality and duration must play a role in this effect.

The symptoms of insufficient sleep, coupled with the documented mental burden of living in poverty, create a vicious cycle that can span multiple generations. It’s extremely difficult to lift oneself out of poverty without the proper energy, resources and mind state to do so – and it’s next to impossible to have that energy and mental clarity without getting enough sleep.

Poverty can cause an individual to sleep poorly, and insufficient sleep can keep the individual in poverty.

While all forms of inequality deserve adequate attention, the inequality of sleep is something that just isn’t talked about enough. Sleep is a fundamental part of our lives, and this growing disparity between rich and poor creates dire, generation-spanning consequences. While income inequality could be justified by any number of economic theories or political views, few would argue that the rich deserve to sleep better than the poor. And yet, that is the case today in America, and the world over. It’s time for this issue to get the attention it deserves.