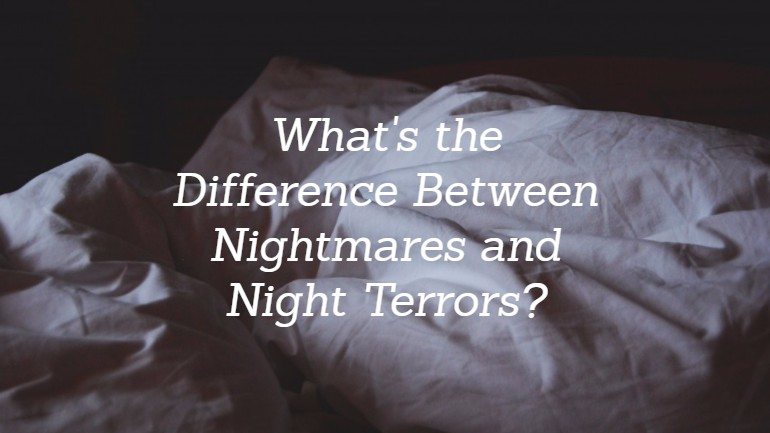 Have you ever woke up with a start in the middle of the night, frightened by something in your dreams? We all had nightmares as children, and many of us continue to have occasional – or even regular – scary dreams. But there is a difference that not many people know about – there’s the simple nightmare, and then there are night terrors. In this guide, we’ll seek to define these two terms and explain the difference between night terror vs nightmare.

What is a Nightmare?

In short, a nightmare is a dream containing disturbing content, and typically occur during REM sleep. Nightmares typically result in feelings of anxiety, stress, and/or fear, and will often cause an abrupt awakening. Occasional nightmares are normal, and nothing to worry about. With that said, frequently reoccurring nightmares can cause issues with sleep quality and daytime alertness.

What is a Night Terror?

Night terrors, or sleep terrors, can be more serious than normal nightmares. Those suffering from night terrors may have an actual sleep disorder, that causes severely disturbing dreams. Night terrors typically occur during non-REM sleep, usually during the first few hours of the rest period.

Night terrors are most common in children, and typically they decrease or disappear as the child becomes an adolescent. Night terrors can affect adults, as well, although it’s less common. When comparing night terrors vs nightmares, you can think of night terrors are a more extreme, more horrifying version of a nightmare. Both of these conditions can be considered parasomnias.

When comparing night terror vs nightmare, there are a few similarities. For one, both could be simply classified as “bad dreams”. Also, both tend to be remembered better than normal dreams, which are often forgotten immediately upon waking (although sleep terrors, particularly in children, are sometimes forgotten as well).

Can You Prevent or Treat Nightmares & Night Terrors?

There is no direct treatment for night terrors or nightmares. With that said, some people have success at preventing or reducing nightmares and night terrors by addressing the root cause of the issue. Unfortunately, actually identifying that issue can be difficult.

Nightmares and night terrors can be caused by stress, eating habits, certain medications, and other factors. In many cases it’s difficult to identify the relevant causes, and in many patients the frequency and intensity of night terrors/nightmares seems quite random.

In the case of night terrors, some parents have found success by waking their child up around the time that they usually experience night terrors. Other patients have had success by working to reduce stress in their life, setting a regular and healthy nightly routine, and other methods. In very rare cases, medication might be prescribed.