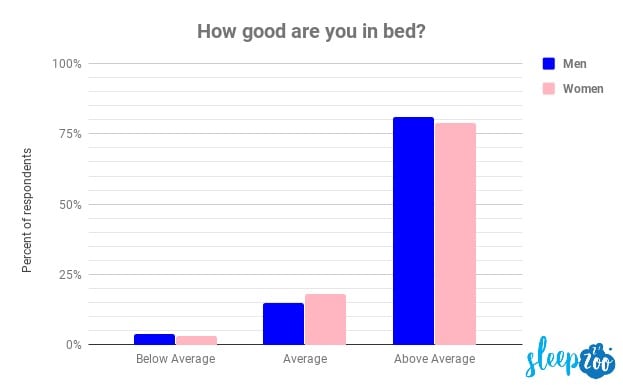 The vast majority of Americans think they’re better looking and better in the sack than the average person, this according to our survey of 2,000 adult men and women.

We asked people all across the country about their romantic lives to get a better understanding of America’s sexual climate in 2018. And there were some very interesting revelations.

We conducted an online survey of 2,000 random adult men and women across the US. Our purpose was to understand how people feel about themselves, their romantic lives, and more.

These are a few of the multiple choice questions we asked: Confidence isn’t a problem for most Americans. Simply put, most of us are pretty darn happy with what we see in the mirror. About 2/3 of men and women alike think they’re better looking than the average person, with the biggest portion of people rating themselves as a solid 7. Those under the age of 30 had especially high opinions of themselves, with 30% of women and 33% of men rating themselves an 8 or higher.

Despite our lofty opinions of ourselves, most women still feel pressured to improve our bodies.

65% of women feel pressured by the media (TV, movies, social media, websites, magazines, etc.) to have a more attractive body, compared to just 31% of men. It’s long been argued that the images we see in the media set unrealistic beauty standards, particularly for women. And as social media has taken off in the last decade, there are even more photos of absurdly beautiful girls and guys with perfectly chiseled bodies. So, even though most of us rate our looks as above average, many of us aren’t satisfied and still feel pressure to look better.

The overwhelming majority of Americans think they’re better than average in bed.

80% of men and women alike think they’re great in the sack. When it comes to getting it on, almost all of us think we’re superstars. Guys and gals both have similarly high opinions of their adeptness under the sheets. Of course, who would want to admit they deliver a sub-par performance in bed? And really, when it comes down to it, there’s no objective way to measure sexual skill as much of it depends on the chemistry between two people, emotional elements, and a whole lot of other factors. So, hey, a little confidence never hurt anybody.

Now, let’s get down to the nitty gritty — How would you rate your looks and your skills in bed?